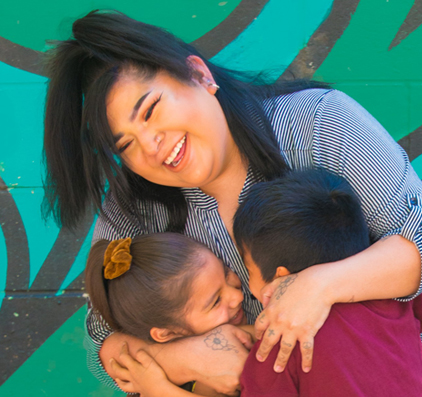 A young mother proves stronger than her circumstances

Born and raised in the Navajo Nation by three generations of single moms, Shianna grew up strong and independent, learning to cook, change her car’s oil, and everything in between. Life shifted when Shianna became pregnant at 16. A second child followed a year later. Shortly after, their father became repeatedly abusive. Shianna dreamt of a new life and moved from Arizona to Denver. But finding a home and stable employment was elusive. She ended up couch-surfing and soon found herself and her two small children living in a tent under a bridge. A desperate call to her mother prompted an online search for assistance. A few months later, Shianna and her kids moved into their new home at Warren Village.

With a safe and affordable home, childcare and early education for her kids, and a family advocate to coach her, Shianna began planning for the future. With just two low-paying jobs on her resume, she knew she needed to focus on earning a degree. She enrolled at Community College of Denver, taking courses at Warren Village through their College to Career Initiative. Shianna is working diligently to complete her degree in December 2021.

“Going to college was not something I ever envisioned doing. It was only with the support of my family advocate that I endeavored to enroll, and now I’m on my way to completing a Paralegal Associate’s degree.”