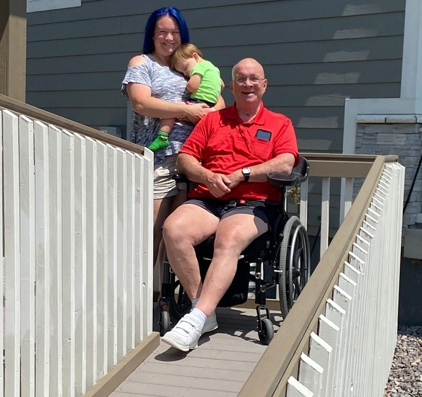 Patrick’s life changed in February 2020 as he was rushed to the hospital after losing the use of his left side. Doctors discovered a massive aneurysm pushing on his brain stem. After multiple surgeries, and still unable to move his left side, he was transferred to Craig Hospital and eventually moved in with his daughter, who became his fulltime caregiver.

The Home Builders Foundation — a Daniels Fund grantee — went to work making this house a home for Patrick. This included building a front wheelchair ramp and modifying his bathroom to be fully wheelchair accessible. The recent completion of this project gave Patrick a new sense of independence and enhanced his quality of life.

“Before the modification, I would have to change wheelchairs to go to the bathroom. I hadn’t been able to fully shower since getting released from the hospital almost a year ago. I can do everything by myself now. I am so, so grateful.”