Margaret Kelly elected to Daniels Fund
board of directors

DENVER – The Daniels Fund is pleased to announce that Margaret Kelly has been elected to serve on its board of directors. The Daniels Fund, established by cable television pioneer Bill Daniels, is a private charitable foundation dedicated to making life better for the people of Colorado, New Mexico, Utah, and Wyoming through its grants program, scholarship program, and ethics initiative. Since inception in the year 2000, it has funded grants and scholarships totaling more than $761 million. 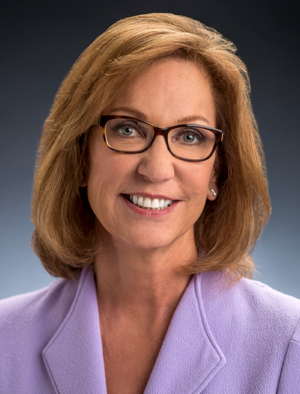 Margaret retired as the Chief Executive Officer of RE/MAX, LLC in 2015. As CEO, Margaret was responsible for the day-to-day operations and strategic direction at RE/MAX across North America and in more than 95 countries around the world. She is recognized by countless organizations for her exceptional leadership skills and commitment to community involvement, and for being an advocate for businesswomen around the globe.

In January 2010, Margaret was appointed to the board of directors of the Kansas City Federal Reserve Bank – Denver Branch, and became Chair in 2015.

Among many honors, she received the Warren Bennis Leadership Award in 2014, was named one of the Top 25 Most Powerful Women in Denver in 2013, and was named one of the Outstanding Women in Business by the Denver Business Journal in 2012. She received the Top Women in Mortgage Banking and Real Estate Services Award in 2011 and was recognized by Inman News as one of the Top 100 Most Influential Real Estate Leaders of 2009. REALTOR magazine named her one of Real Estate's 25 Most Influential Thought Leaders in 2006.

As a breast cancer survivor, Margaret is an advocate against the disease. She received the Komen Ambassador Award in 2010. Also, she has been named to the list of 25 Yoplait Champions, which recognizes ordinary women and men doing extraordinary things in their community to fight breast cancer.

Margaret is always mindful of her humble roots, learning business basics in her family’s machine shop in Detroit. She received a Bachelor of Business Administration in Finance from Walsh College in Troy, Michigan. In 2006, she received an Honorary Doctorate of Laws from her alma mater. The American Association of Community Colleges presented her with the Outstanding Alumni Award in 2005. She holds a Certified Residential Brokerage Manager (CRB) designation, conferred by the Council of Real Estate Brokerage Managers.